Houston’s Third Ward is a historically African American neighborhood with a long tradition of community pride and civic engagement. Rice University’s Baker Institute for Public Policy, in partnership with a community-based organization, the Sankofa Research Institute, conducted a needs assessment to support the development of data-driven strategies, policies, and investments in the Third Ward. In addition, the project partners worked with researchers at Traffic Engineers, Inc as well as community researchers in Third Ward, and published a mobility assessment report, discussing the links between health and built environment.

The neighborhood survey was conducted from April 2017 to August 2018 in three phases across the northern parts of the Third Ward neighborhood in Houston, Texas. Here we present data from phase 1 and phase 2, including every household north of Alabama Street. The sample includes 1,277 heads of households living in the three census tracts (3122, 3123 and 3124). Data were collected by community residents who were trained to be part of the research team and administered the survey door-to-door. To read more about the methodology, please click here.

To get access to the neighborhood survey data, please make a request through the Kinder Urban Data Platform. 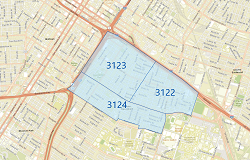 Survey findings on transportation access suggest there are signigicant barriers to mobility in the Third Ward. Residents in Census Tract 3123 are more likely to own a car and use it as primary mode of transportatioin. On average, nearly 27% of residents take bus or rail. This result is not surprsing, given the proximity of the Third Ward to public transit and low car ownership rate. About 8% of residents in Census Tract 3122 ride bikes as the primary form of transportation, much higher than the other two tracts.